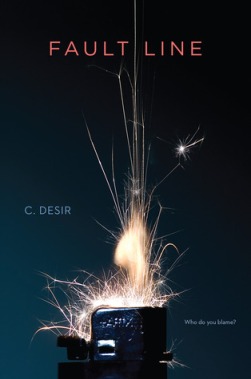 As promised some time ago, I am finally getting around to writing about Fault Line by Christa Desir, a YA book that addresses rape. It was a struggle to read and finish the book, and it’s been a struggle to make myself think about it again. It’s such a hard, but very important, subject to talk about. I’m glad that Desir wrote this book, though there are other books that may be better written about rape or address it differently. This is important because the story is told from the rape survivor’s boyfriend’s point of view.

This guy, Ben, loves Ani in that great high school way when it’s the first time you’ve really loved someone that you’re not related to and it’s amazing and exciting and crazy. (I actually think it’s unfair to deride high school love: it’s the most that teens can love someone at that time. Sure, maybe it’s not a grown up, mature love, but they are just learning how to do it, give them a break!) I think he really does care about her, so when she goes to a party and is raped by potentially multiple guys and a cigarette lighter is left inside her vagina, he feels guilty. He wasn’t there to help. It’s a nice thought but he’s still not the one the blame – it’s the jerks who took advantage and brutalized Ani.

Desir, who works with teens who are survivors of abuse and rape, clearly knows the impact of violence like this and wants Ben, Ani, and the readers to know that it’s not Ani or Ben’s fault. There is a rape counselor character in the book who has some heavy handed commentary about the situation, but it’s very well intentioned. What is infuriating – but not perhaps uncommon – is that as the story progresses and the bullies at school are beyond cruel to Ani making her feel responsible calling her a slut and saying she asked for it, is that Ben starts to believe that, too. He believes it and watches as Ani believes it, too, and watches as people start treating her as merely a sex object. Then that’s what he starts to do, too. He pushes Ani to have sex with him after the rape even when she is at first hesitant, and then even after he knows that there is no more feeling behind it for Ani. She’s become numb to emotions and he knows it, yet he continues to sleep with her all the while bemoaning that she’s not the girl she used to be. He wants to make her back into the girl he knew; he wants to fix her. This is the worst. I hate the idea of “fixing” people.

Maybe I’m just writing about this now* because a person I was dating for a few weeks “broke up” with me (can you call it breaking up if you’re seeing someone for a month or so? I don’t know) because he learned a bit about my history of my parent’s divorce, the death of friends and subsequent depression in high school and realized he’d want to try and fix me. He actually said he was attracted to me because I seemed “wounded.”

What?! I am not wounded. I am a person with a history just like any other person but that doesn’t make a pathetic, helpless, scared bunny who needs someone to swoop in and save me. Blech.

After that I told him I couldn’t be his little project – I am not the lady equivalent of a fixer-upper house –  he said he’d probably still try and fix me against his better judgment and that was it. The end. No thank you, sir. I’ll just be over here being amazing without you!

I’m not saying that people can’t have problems and that you can’t want to help people with them. Helping and supporting is one thing – that’s what Ben was missing out in Fault Line. He was putting his needs over Ani’s and trying to fix her for himself not for her sake. That’s not right. And I’m also not saying that you shouldn’t want to work on your issues or problems or whatever it is that everyone has to deal with. But don’t take on other people’s lives in an attempt to mold them into what you want them to be.

Anyway, my personal life aside, I think Desir achieves in writing a story about the far-reaching aftermath of rape. I think Ben’s reaction is realistic, I just wish it wasn’t. Maybe it will show teens and those who read it about the dangers of reacting this way and that we need to support rape survivors more. Also, I think this another entry into the “likeable characters” debate where some people think your characters have to be likeable or act in admirable ways for it to be a good story despite the fact that this annoying, Pollyanna-type thinking doesn’t often happen in real life. I wish Ben could have been better even in this impossible situation but that doesn’t mean the book is bad. It’s just real.

If you are interested in learning more about rape issues and how you can support rape survivors check out RAINN’s website. The Rape, Abuse, & Incest National Network is a great organization and has partnered in the past with Laurie Halse Anderson, author of one of the best books on teen rape, Speak.

So, I will leave you with this slightly sad start to Monday and with the assurances that I’m really fine. In fact, I’m super awesome and anyone who doesn’t realize that is foolish. Now I’m off to run errands and go to work to make these adorable DIY snowglobe ornaments. Yes, I found them on Pinterest, and for once they are actually as easy as they seem!

*Also the book is due back to the library…

4 thoughts on “Fault Line and the danger of “fixing” people”